Hello, everyone, I realized that it has been quite a while since I’ve shared this short story. For a refresher, you can read Chapters I and II here and here. An intense and fast-paced story greatly inspired by Doctor Who and Around the World in 80 Days by Jules Verne. I hope you enjoy this magnificent adventure today!

“Ahm, yes, thank you, sir. You may now stop,” Miss Perk said, pulling her hand away. “The RMS Olympic is the second best steamer beside that of her sister, the RMS Titanic!” the doorman called, wincing.

The lovely RMS Titanic sunk two years prior – the most lovely of all ships. Of course, Miss Perk and the Legendeer were there when she sank into the ocean. How could they miss a moment in history as that? Although the dark, haunting image of flashing lights and cries still haunted the young woman’s memory like the image of a grenade flashing before one’s eyes. Of course, she had experienced that as well at midnight, September 9th, 1942.

Joan took her seat on the third deck, looking out onto the Adriatic Sea. Passengers moved about, barely taking a second glance at Perk’s oddities. She had begun to grow weary of being called a man for her dress and therefore disguised her appearance through a simple illusion – A Peterson’s Necklace. Invented in 1945 before the time fold, the silver device disguised one to fit within any chosen time period previously. Being set in 1945, Joan had no issue setting the dial to 1914, appearing to passersby as a proper woman. Of course, she had not changed a thing about her – still dressed in a faded blue button up shirt, waistcoat, and khakis. Such a clever device, indeed. 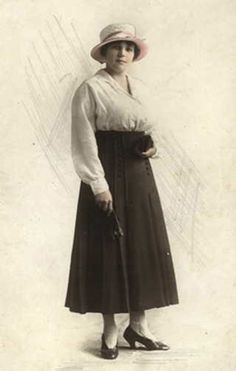 An idea of a woman’s garments during WWII. Image found here.

“Tea, madam?” A dark woman asks, dressed in a golden gown and holding a pristine white tray upon a silk gloved hand.

Her name tag read Servant Miag Zui. Of course, of course, Joan forgot Italy never abolished slavery. “Servant” was how they would address the woman on such a quality steamer. Joan felt sick to her stomach with the thought, yet mustered a nod. As Miag returned, miss Perk took the woman’s dark hands in her own, whispering a quick thank you before turning away. She mustn’t show kindness to a slave. A man across the deck raises his plucked, black eyebrows but says not a word.

The RMS Olympic traveled between 21-24.2 knots, and the Adriatic Sea was precisely 500 miles, meaning between 17-20 hours of travel. 8 hours into the distance, yells broke out from the floors below, and the steamer suddenly stopped. Joan knew in an instant something was wrong and raced down the eight passenger decks. Smoke filled the air as she stood at the door of the crew deck. The passengers above stared down the stairs at her in awe, shocked to see a fair lady embrace danger. Of course, she was no fairer than any woman in her time, that was just the clever disguise. Throwing open the doors, she glanced at the watch. Still ticking, of course, it was still ticking away.

The deck was nearly impassible – filled with 950 crewmen shouting at one another. At last, Joan worked her way through the room and glanced around. The boilers had clearly exploded, hence why the ship had stopped. A fire was spreading ravishingly through the floor, devouring every living and inanimate object in sight.

Sprinting forward, Joan pulled out the silver fob watch once again and leaped over the collapsing floor. Below was storage then open sea. She could not risk this ship sinking. With a deep breath, Joan stood inches from the burning boiler and thrust her hand with the watch into the flames right as the subsequent explosion knocked the RMS Olympic further back. There was no boiler, no crew deck, no crew, no life. Joan alone stood there, hand extended into nothingness, watch flicking in and out of her sight. Seconds flashed into hours and days, fire and destruction crashing against the never ending alley of life and healing. With a flash of gold and blue light, the sudden war was over, time reversed five minutes.

There Joan Perk stood, fob watch in hand, as crewmen bustled by on regular duties. Five minutes before the second explosion and three before the first. Thrusting the watch into her waistcoat pocket, Joan turned to the main boiler and began checking the stats. The men stopped, staring at her in confusion. She gasped the Peterson’s Necklace, changing the dial to “Male, 1914” instead of female. While not perfect, the illusionary disguise was better than nothing.

With two minutes left until the first explosion, miss Perk stared down the boiler, watching the water bubble more powerful with every passing second. The thermostat suggested the water twice the levels it should be. If the dark force changed history by sinking the RMS Olympic, the rest of the world would forever be impacted and history would wrap over itself, destroying everything in between. She would never have been. Earth would never have been, beyond that moment. 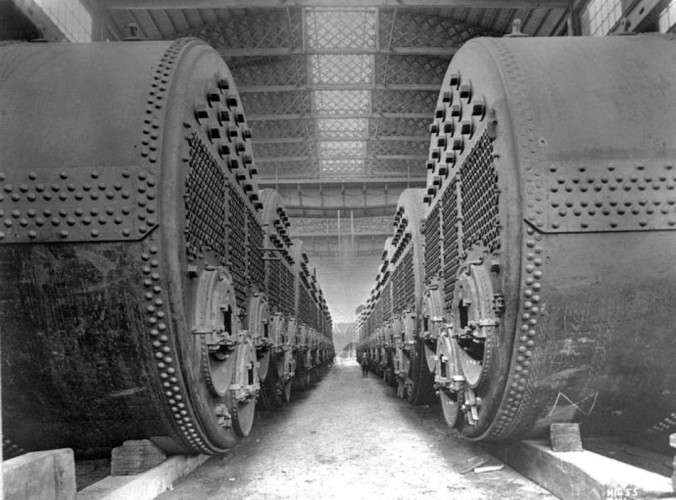 A few of the RMS Titanic’s boilers. Of course, the story is not historically accurate on how Miss Perk disassembled them or checked the stats. Image found from here.

With quick hands, Joan disassembled the main boiler’s wiring, feeling the ship lurch slower. The crewmen turned to her with shouts, but she worked on, removing the second and third, bringing the steamer to a cold, gradual stop. Within seconds, Joan was surrounded by angry crewmen, so she ducked down, switched the necklace’s dial back to “Female, 1914”, and ran up the stairs.

At the top, she turned and shouted in a kind, sweet voice, “The boilers were about to explode, I’ve heard! I beg of you, do your jobs right next time, crewmen! Otherwise, I shall give the RMS Olympic a sour review.”

With that, Joan turned on her heel and ran upstairs, laughing to herself as the crewmen and women ran to fix the boilers. She had narrowly escaped time collapsing in upon itself, although the danger was not yet over. The dark force was after her and the watch, but as long as it ticked on, she was safe. At least, until the forty day deadline had expired.

For the remainder of the trip, all went smoothly. Crewmen and servants began a soft rumor about a woman on the crew deck, but nothing more was ever said.